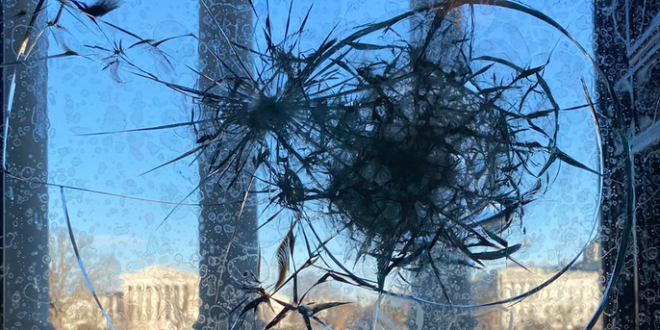 Shattered Windows Of Capitol Doors To Be Preserved

Laura Condeluci, a spokeswoman for the Architect of the Capitol, says the shattered windows in the East Front doors, which were repaired Thursday, would be saved. “The broken panes of glass removed today from the historic Columbus Doors at the east entrance of the Rotunda were preserved,” Condeluci said Thursday in response to a question from NBC News.

Rep. Dean Phillips, D-Mo., told NBC News that he and Rep. Andy Kim, D-N.J., are drafting a letter today to “encourage that it be enshrined in a display next to the door from which it came.” In addition to preservation, they ask that the panels be “prominently displayed for future generations to bear witness to the events of that day and the fragility of our democracy.”

Shattered glass from doors of Capitol’s East Front to be “preserved” https://t.co/zdIlqC2jZl

SYMBOL OF THREAT: This shattered window on the center doors of the Capitol is the last remaining major damage I saw left as I walked around the Capitol last night. It remains as a symbol of the hate that penetrated our democracy and flooded inside. pic.twitter.com/9DM0ffWM7V