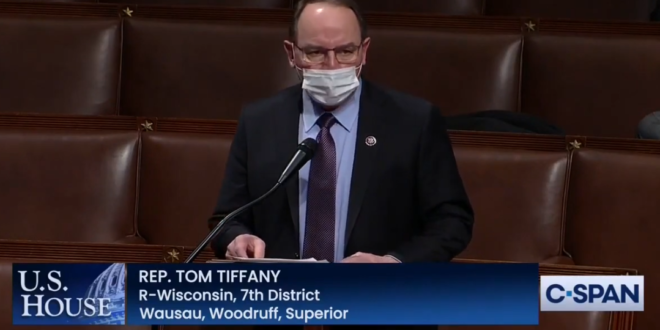 Today, Rep. Tom Tiffany (WI-07) introduced the Oversight for Members And Relatives Act or “OMAR Act,” which would put an end to the practice of candidates for office tapping their campaign accounts to enrich their spouses.

“For too long, lawmakers of both political parties have engaged in the ethically dubious practice of pocketing campaign funds by ‘hiring’ their spouses and laundering the money as campaign related expenses,” said Tiffany.

The bill is based on a bipartisan proposal introduced in the 110th Congress by Rep. Adam Schiff, and which was endorsed at that time by members of the current House Democrat leadership team.

Fox News reported how an incumbent House member from Minnesota took advantage of this loophole “paid nearly $2.8 million to her husband’s political consulting firm so far in the 2019-2020 election cycle..”

I can find no evidence that Tiffany ever objected to Trump’s “hiring” of his daughter to work in the White House, much less Trump’s “funneling” of millions in campaign donations to his own businesses.

Tiffany, who was elected in 2020 to succeed reality star Sean Duffy, was among the House Republicans who signed a amicus brief in support of overturning Biden’s win. He also voted against stripping the QAnon nutbag of her committees.

As for Adam Schiff’s 110th Congress bill, it was passed by the House in a voice vote after which it promptly died in the Senate Rules and Administration Committee.