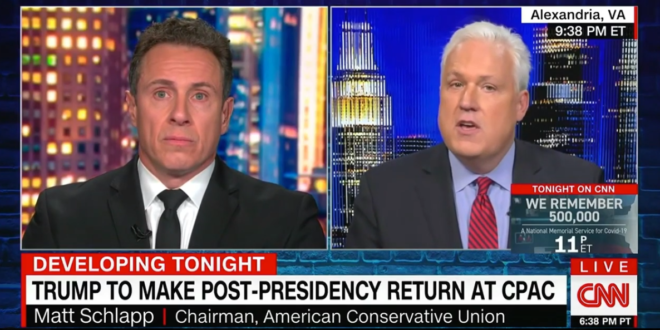 Chris Cuomo invited Matt Schlapp, the chair of the American Conservative Union, onto his CNN show Monday to explain why ex-President Donald Trump has been invited to address the organization’s Conservative Political Action Conference (CPAC) this week. But the interview soon went off-the-rails as Cuomo was forced to debunk Schlapp’s repeated lies about “widespread voter fraud,” part of the falsehood pushed by Trump himself about the 2020 election being stolen from him.

American Conservative Union Chairman Matt Schlapp defends his decision to invite Donald Trump to speak at CPAC this weekend, despite the former President’s ongoing lie that he won the 2020 election. https://t.co/vboWYo5DjU pic.twitter.com/wOeCqdyMo5

“Just because you fail in court doesn’t meant you don’t have a good case,” Matt Schlapp says on CNN when asked about a string of election lawsuit losses.

In a Newsmax interview today, CPAC’s Matt Schlapp said of his event: “Our theme is ‘America Uncanceled.’ And what a perfect way to demonstrate the grossness of our cancel culture than having Donald Trump speak.” A few hours later, CPAC cancelled scheduled speaker Young Pharaoh. pic.twitter.com/fLkud2D1D4

REMINDER of GOP’s embrace of violence in 2020: Matt Schlapp on Banishing Mitt Romney From CPAC: I Would Be ‘Afraid For His Physical Safety’ If He Came https://t.co/BMZPtvIEph via @mediaite