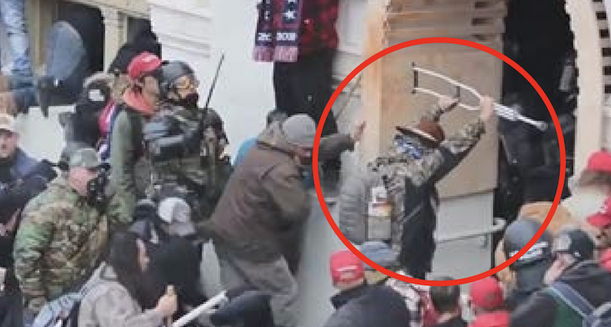 Of the footage that impeachment managers unspooled during former President Donald Trump’s Senate trial, one of the most brutal scenes showed rioters engaging in hand-to-hand combat with authorities inside the tunnel leading to the U.S. Capitol. On Feb. 11, just one day after footage of the melee inside the tunnel became public, the FBI Newark Field Office interviewed an unidentified witness who contacted them about Dallas resident Luke Coffee.

“Coffee stated he did not engage in any type of physical confrontations with the police while at the Capitol Building,” FBI agent Jeffrey Johannes wrote. Believing that was a lie, authorities kept collecting tips on Coffee from the public and secretly opened a sealed case against him on Feb. 16, charging him with six counts that included assault with a dangerous weapon. Those charges became public on Thursday, in court papers replete with images of the confrontations.

ARRESTED: Luke Coffee of Dallas turned himself in at the federal courthouse in Dallas.

Luke Coffee allegedly used a crutch to force his way past @CapitolPolice and @DCPoliceDept officers during the Jan. 6 #capitolriots.

He was identified by numerous tipsters & a college classmate who just happened to be a Special Agent with the @FBI and arrested this week in NDTX. pic.twitter.com/iEKnqFwI4T

Please share across all platforms. Do you Know this person?? Please contact the FBI with ID 108-AFO if you do! #SeditionHunters #DCRIOTS #CapitolRiot #Doyouknow Please DO NOT post names on social media #highfivecowboy pic.twitter.com/MUq2pz5rh1