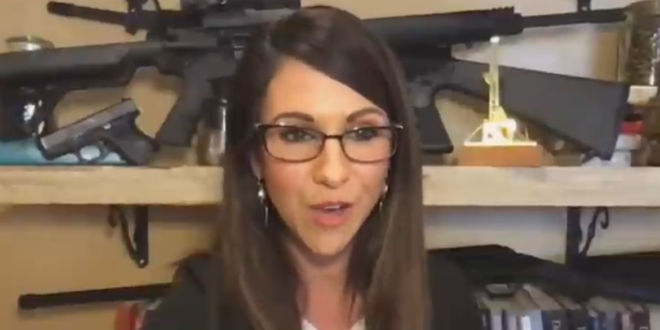 Freshman Rep. Lauren Boebert (R-Colo.) responded to criticism of her gun storage in her Zoom background during a House Natural Resources Committee meeting. During the committee’s organizing meeting held over Zoom, the Republican appeared to have several guns including rifles and a hand gun propped up behind her on a book shelf.

Her background was immediately spotted with journalists, lawmakers and Twitter users pointing it out on the platform. Boebert has faced backlash in the past regarding her stance on firearms after she released an ad last month stating “I will carry my firearm in D.C. and in Congress.”

I always thought my dirty dishes piled up and accumulating bacteria were the most dangerous thing in a Zoom background… 😳😳😳 #SafeStorage pic.twitter.com/uveXvGfafu

As the Robinhood hearing starts, the real action — apparently — is at the Natural Resources organizing meeting, where Rep. Jared Huffman (D-Calif.) is roasting Rep. Lauren Boebert (R-Colo.) for the gun shrine she’s constructed as a Zoom background. pic.twitter.com/I5GdIVsM1B

Who says this is storage? These are ready for use. https://t.co/y9fxckjcGl

Previous Ted Cruz: I Only Flew To Mexico “To Be A Good Dad”
Next Politico: Trump Snubs Haley’s Request For A Sit-Down