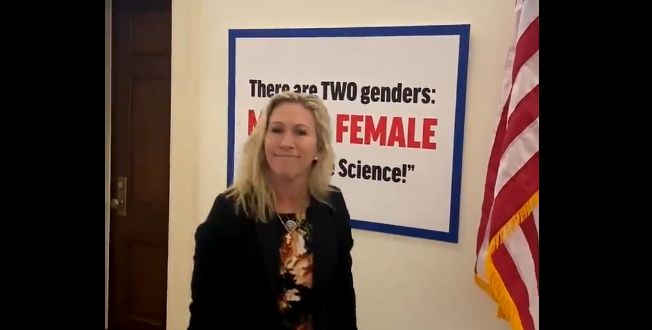 Illinois U.S. Rep. Marie Newman’s push to pass a law that would ban discrimination against LGBTQ Americans has put her at the center of a feud with controversial Republican Marjorie Taylor Greene, a pro-Trump freshman congresswoman from Georgia who has espoused baseless conspiracy theories.

On Tuesday, Newman took to the House floor urging for the passage of the Equality Act, which would prohibit discrimination based on gender identity and sexual orientation. During an emotional speech, the freshman Democrat from suburban LaGrange choked up as she talked about how the law would offer protections for her transgender daughter.

Taylor Green gave a floor speech in opposition of the bill and then unsuccessfully tried to adjourn the House to block its movement through the chamber. That prompted Newman, whose new office in Washington’s Longworth House Office Building is directly across the hall from Taylor Greene’s, to display a transgender flag in the hallway.

Greene, who lost her committee memberships by promoting false and extremist claims, quickly responded with her own video mocking Newman’s earlier tweet as she hung up a poster that said, “There are TWO genders: Male & Female. Trust the science.”

“Thought we’d put up ours so [Newman] can look at it every time she opens her door,” Greene said.

The exchange quickly went viral, leading critics to accuse Greene of cruelty directly aimed at Newman’s family — the latest bit of outrage spurred by a House member who has espoused QAnon’s baseless theories and falsely suggested that former president Donald Trump’s supporters were not present at the Jan. 6 Capitol riot.

Our neighbor, @RepMTG, tried to block the Equality Act because she believes prohibiting discrimination against trans Americans is “disgusting, immoral, and evil.”

Thought we’d put up our Transgender flag so she can look at it every time she opens her door 😉🏳️‍⚧️ pic.twitter.com/dV8FatQFnx

Thought we’d put up ours so she can look at it every time she opens her door 😉🇺🇸 https://t.co/7joKpTh6Dc pic.twitter.com/aBGRSiIF6X

As mothers, we all love and support our children.

But your biological son does NOT belong in my daughters’ bathrooms, locker rooms, and sports teams. https://t.co/ex0LXGHAew

This is sad and I’m sorry this happened. Rep. Newmans daughter is transgender, and this video and tweet represents the hate and fame driven politics of self-promotion at all evil costs. This garbage must end, in order to #RestoreOurGOP https://t.co/gcPZ5Cu7Vr

Sometimes on Twitter, as in life, people remind you exactly who and what they are. I’m proud to fight for equality with @RepMarieNewman, and I’m moved by her courage and that of her daughter. https://t.co/kfHl5kAJQz

Sickening, pathetic, unimaginably cruel.
This hate is exactly why the #EqualityAct is necessary and what we must protect @RepMarieNewman’s daughter and all our LGBTQ+ loved ones against. https://t.co/4sfeyQlGLd

Previous CHATTER AWAY: Overnight Open Thread
Next Carlson: Immigrants Will Make US A “Welfare State”