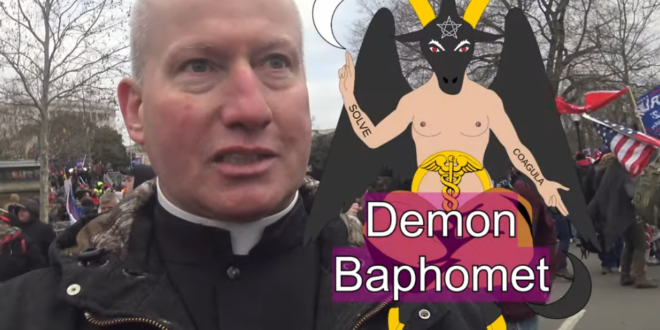 Priest Under Fire For Exorcism During Capitol Riot

A Nebraska priest who was in Washington, D.C., at a Jan. 6 rally in support of then-President Donald Trump told a videographer that he had performed an exorcism at the U.S. Capitol because a demon is “dissolving the country.”

The Rev. David Fulton, a pastor at St. Michael in Central City and St. Peter in Fullerton, was featured in a video shot by Eddie Becker on YouTube called “Voices from the Capitol Insurrection.”

Deacon Tim McNeil, the chancellor for the Archdiocese of Omaha, said that Fulton’s opinions do not reflect the views of the archdiocese. McNeil said that Omaha Archbishop George Lucas is “very upset” with Fulton and said Fulton should not have been at the rally.

When asked if he performed an exorcism at the Capitol, he said he indeed had — and spoke about a demon that had possessed the building. At Mass on Sunday, Fulton said he regretted attending the rally, which led to a riot that left five people dead.

“I used bad judgment in participating in the rally in Washington, DC, on Jan. 6, 2021,” he said. “I spoke and acted in a way that was not consistent with my vocation as a priest. I acknowledge that the confusion and hurt that I caused to you, to the church and to the other members of the community.”