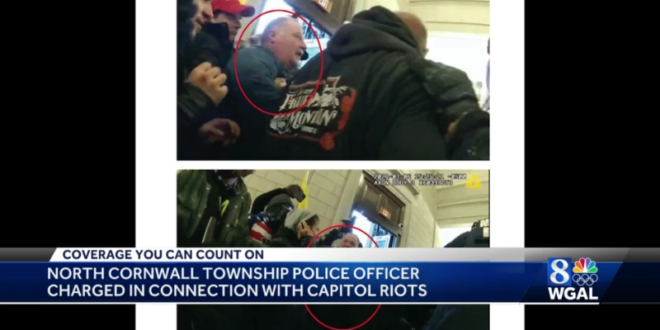 A police officer in Lebanon County is charged in connection with the Jan. 6 riot at the U.S. Capitol in Washington, D.C. Joseph Fischer, with the North Cornwall Township Police Department, was arrested Friday by the FBI.

He has been suspended without pay, according to a news release from the township. A criminal complaint alleges Fischer posted video of himself entering the Capitol on the day of the riot and that he got into a physical encounter with at least one police officer.

He is charged with obstruction of law enforcement, entering a restricted building and other offenses. Fischer is in Dauphin County Prison. A preliminary hearing is scheduled for Feb. 23 in federal court.

North Cornwall Township police officer Joseph Fischer has been arrested by the FBI in connection with the U.S. Capitol riot in January, according to officials. https://t.co/JXTHDDMXsJ pic.twitter.com/AhzS9IhsfQ

One day after posting a video of himself fighting with other officers during the US Capitol riot, a Pennsylvania cop allegedly told an associate in a private message that “The FBI may arrest me ..lol,” according to court documents https://t.co/1GK3Ce7ewl