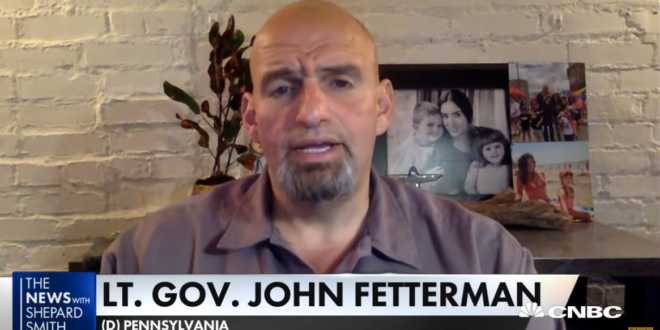 Fetterman filed to run in what is expected to be one of the nation’s most competitive races last week, but was cagey on whether it constituted a formal announcement. The lieutenant governor raised over $1 million after opening a campaign account in January.

“Talk is cheap, but for the past 20 years, I have been working to represent, rebuild, and to advance these places,” Fetterman, formerly the mayor of Braddock, Pennsylvania said in a video announcing his run Monday.

So very many of you stepped up and I can’t thank you enough.

Every 67 counties. All 50 states. @giselefetterman and I are overwhelmed with gratitude by the response.

If you send me to the US Senate, I will always be 100% Sedition-Free.

We as a nation crossed lines I never thought we would-or even could.

My pledge to you: to hold core ideals like democracy + the peaceful transfer of power sacred, always. 🇺🇸

I’ve never had to “evolve” on core values like:

✅ The Union Way of Life.

✅ Ending the War on Drugs.

✅ No places left behind.

✅ Your zip code must not be your destiny.

For 20 years, as a social worker, mayor or Lieutenant Governor, I’ve always fought for what I know to be true.

Thank you to the 37,000 grassroots donors who stepped up.