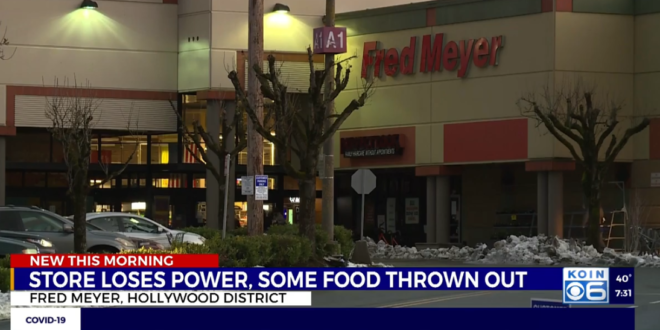 Roughly a dozen Portland police officers faced off with a small group at a Northeast Portland Fred Meyer on Tuesday after people tried to take food that had been thrown away. Workers at the Hollywood West Fred Meyer threw away thousands of perishable items because the store had lost power in an outage brought on by the region’s winter storm.

Images on social media showed mountains of packaged meat, cheese and juice, as well as whole turkeys and racks of ribs that had been tossed into two large dumpsters near the store. Within a few hours, people seeking food from the dumpsters began to report police officers showing up to guard the dumpsters and prevent people from taking the items.

Read the full article. A similar situation happened in Manhattan in the days after Hurricane Sandy.

Unfortunately, due to loss of power at this store, some perishable food was no longer safe for donation to local hunger relief agencies. 1/2

2/2 Our store team became concerned that area residents would consume the food and risk foodborne illness, and they engaged local law enforcement out of an abundance of caution. We apologize for the confusion.

Fred Meyer employees & armed security guard are opening packages & destroying food that they threw away in garbage bin so hungry people & ppl in need can’t get them.

I’ve been boycotting Fred Meyer since they let non maskers shop but this is nail to the coffin. pic.twitter.com/787lKI7dbx

When I arrived on at the Hollywood @Fred_Meyer in Portland this evening, I was greeted by 12 @PortlandPolice officers who were apparently guarding two dumpsters full of food that mutual aid orgs were trying to distribute and hungry folks were trying to eat
1/ pic.twitter.com/xyTIcTBMeI