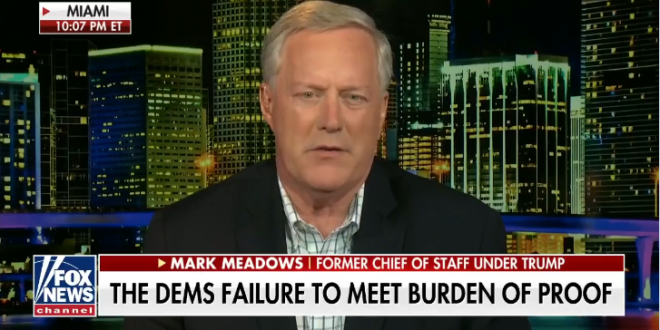 Meadows Lies About Trump’s Actions On Day Of Riot

“We took immediate action,” Meadows claimed after Fox News host Laura Ingraham asked why the former president chose not to tell the rioters to disperse during the hours they were ransacking the Capitol, noting it has been a major talking point from House Democrats during Trump’s Senate trial.

“He wanted our National Guard to be on the ready for any civil unrest that might be there,” Meadows then claimed. “And so he tweeted out a number of things as we were looking at some of this unfold, what we now know happened actually was not as graphic as was laid out over the last couple of days.”

Read the full article. Not only did Meadows lie about the National Guard, he went on to claim that Trump condemned the riot “in real time.” That’s a whopper evident to anybody watching TV that day.

If only there was a way to get Meadows to talk about this under penalty of perjury, like calling witnesses. This version of those hours on Jan 6 is at odds with what multiple people have described. Here’s him on Ingraham. pic.twitter.com/C5cjg2nvzZ