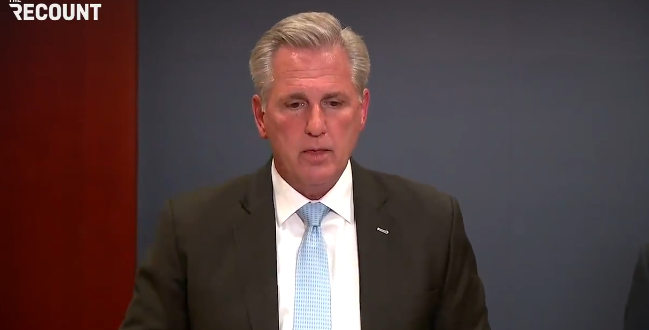 McCarthy Claims He Knows Nothing About “Q-On”

House Minority Leader Kevin McCarthy (R-CA) claimed on Wednesday that he did not know what QAnon was, let alone how to pronounce it. But in an interview with Fox News last August he specifically said there is “no place for QAnon in the Republican Party” when discussing Marjorie Taylor Greene’s run for Congress.

McCarthy answered a question from Fox News’ Shannon Bream about Greene’s pro-QAnon rhetoric by saying, “Let me be very clear. There is no place for QAnon in the Republican Party. I do not support it and the candidate you talked about has denounced it.”

“Denouncing Q-on, I don’t know if I say it right, I don’t even know what it is– any from the shootings, she said she knew nothing about lasers” pic.twitter.com/R49WoE9TvL