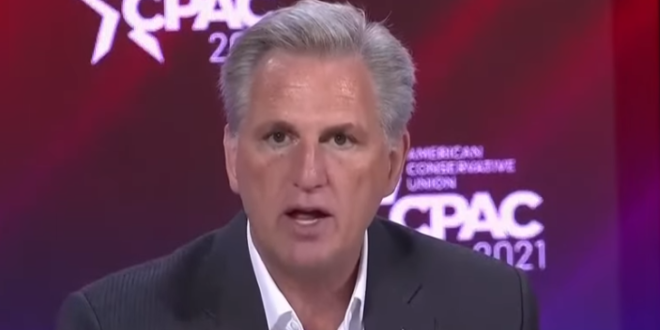 Rep. Kevin McCarthy on Saturday said he’d wager his own home on Republicans reclaiming a House majority in 2022. “We’re going to get the majority back. We’re five seats away,” he told a crowd at the Conservative Political Action Conference.

“I would bet my house. My personal house. Don’t tell my wife, but I will bet it,” he continued. “This is the smallest majority the Democrats have had in 100 years.”

In the 2020 elections, Democrats retained control of the House. Democrats now have a slim majority in the lower chamber, and Republicans need to flip just five seats to regain control.

Pelosi responded within hours of McCarthy’s CPAC appearance in a statement to Newsweek.  “No one should be surprised the Minority Leader is willing to wager his home. McCarthy doesn’t have much to give after sacrificing his integrity trying to cancel $1400 survival checks for Americans trying to make ends meet during a deadly pandemic,” said the statement emailed by Pelosi’s deputy communications director.

“I will bet my house … my personal house,” he said to cheers from the crowd at the Conservative Political Action Conference.https://t.co/WAfOgKjXy0