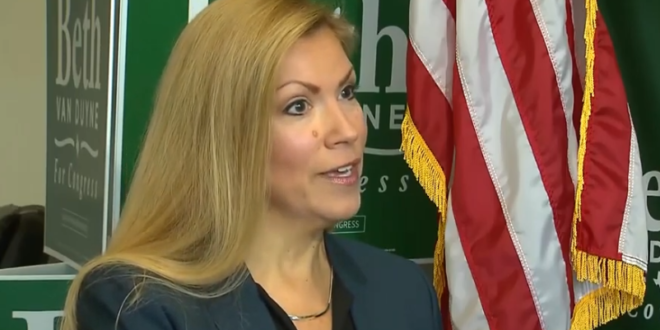 Man Kills Himself Outside Home Of GOP House Rep

An unidentified man took his life in front of the home of Congresswoman Beth Van Duyne Wednesday afternoon. Irving police say the incident happened around 3:45 p.m. Officers responded to a call of a shooting on Shumard Oak Lane.

When officers arrived, they found an unidentified man on the sidewalk in front of Van Duyne’s house. He died of a self-inflicted gunshot wound. Police are awaiting positive identification of the man from the medical examiner’s office.

When the officer arrived, he found a man who was deceased from a single gun shot wound, with the gun still in his possession. The man was lying on a sidewalk leading up to the front porch of the home.

He said that Van Duyne was in her home with other people at the time of the shooting, and only heard the gun shot. He said the congresswoman looked out the window and saw someone lying on the ground with a gun in their hand, and immediately called 911.

RELATED: Van Duyne served as Irving’s mayor before taking a position with HUD during the Trump administration. She was first elected to the US House in 2020 by a margin of 1.3 points. During her campaign she called her opponent a coward for canceling appearances due to the pandemic. She has flouted face mask protocols and praised Trump’s handling of COVID. She did not join the amicus brief calling for overturning the election.

Previous “Lamborghini Man” Pleads Guilty In $4M Bailout Scam
Next Fauci: Everyone Should Have Vaccine Access By April