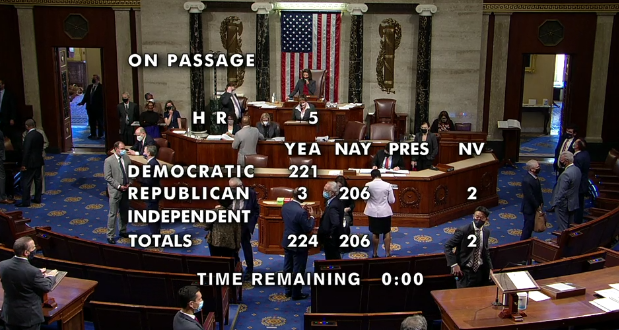 The House is set to vote today on the Equality Act, which amends the 1964 Civil Rights Act to ban discrimination against people based on sexual orientation and gender identity. It also provides sweeping protections for the LGBTQ community against discrimination. Your Huddle host caught up with Rep. David Cicilline (D-R.I.), the House co-sponsor of the bill, who said passage of the Equality Act would be an “incredibly important achievement.”

The bill has the support of every single House Democrat as a co-sponsor, House Democratic Caucus chair Hakeem Jeffries said Tuesday. Rep. Elise Stefanik (R-N.Y.) told your Huddle host she previously supported the legislation and plans to do so again this year. Cicilline says he is hoping to get the eight Republicans who previously supported it to join him again this year — if not more.

The House convenes at 10AM and debate on the bill should begin around noon. Allegedly! I’ll bump up this post throughout the day and add live-streams as they become available. Watch here in the meantime.

UPDATE II: Despite the on-screen clock, members have 45 minutes to cast their votes due to a rule allowing proxy votes by those not in the chamber.

UPDATE III: And that’s that, but without the expected eight votes from GOP reps.

The House is voting on tabling the Rosendale (R), MT Motion to Reconsider for H.R. 5 – Equality Act.

Rep. Angie Craig pounded the gavel and said the Equality Act had been passed. Then a Republican objected and asked for a table motion to reconsider (second vote,) so now Congress is voting all over again.

Update: The House is now considering whether to table a motion to reconsider, which will almost certainly be defeated.