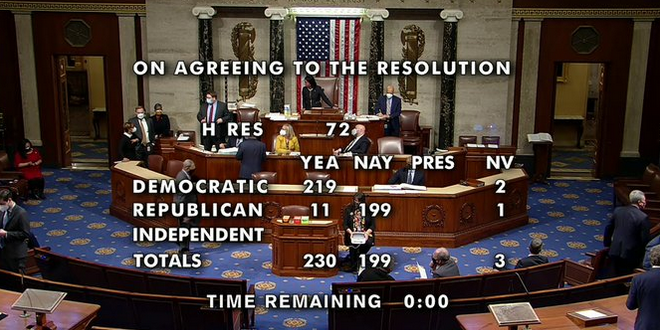 The House will vote Thursday on a measure to remove Republican Rep. Marjorie Taylor Greene from her committee assignments, a decisive step that comes in the wake of recently unearthed incendiary and violent past statements from the congresswoman that have triggered widespread backlash from Democrats and divided congressional Republicans.

House Democrats, who control the chamber, set up the vote after first attempting to pressure Republicans to strip the Georgia Republican of committee assignments on their own.

House Republicans have not taken that action, however, and House GOP leader Kevin McCarthy on Wednesday released a statement calling the push by Democrats to take away the congresswoman’s committee assignments a “partisan power grab.”

UPDATE: And she’s off those committees with 11 “yes” votes from House Republicans, who should all brace for death threats from the red hats. There was one abstention and two reps did not vote for reasons not yet known.

Marjorie Taylor Greene once brought a cardboard cutout of Trump on stage, praised him, and then began rubbing her hand on his crotch. #MarjorieTaylorGrope pic.twitter.com/ay6RHSbgNX

Hoyer: “In 2019, during the same election cycle in which she ran, [Greene] showed support for comments online that the quickest way to remove Speaker Pelosi from power would be, and I quote, a bullet to the head. Did any of you hear Steve king say anything like that?” pic.twitter.com/Xn1c2Op7Vg

Who among us hasn’t taken to Facebook to endorse political assassinations or sound off on Jewish space lasers? https://t.co/93HAfhANgL