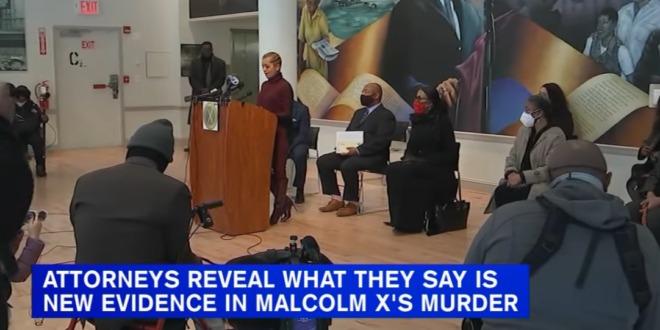 Letter Implicates NYPD And FBI In Killing Of Malcolm X

Fifty-six years after the death of Malcolm X, lawyers revealed what they called new evidence of a conspiracy, perpetrated by the NYPD and the FBI to assassinate the Civil Rights activist in Harlem.

Ray Wood was an undercover police officer at the time – his family and their attorney now claim Wood wrote a letter on his deathbed confessing the NYPD and the FBI conspired to kill the civil rights activist.

Malcolm X was gunned down in February 1965 in Harlem during a speaking engagement. Wood’s family says in the letter that Wood wrote, he stated his responsibility was to ensure Malcolm X’s security detail was arrested days before the assassination.

Wood says in the letter he was afraid he would face major consequences if he came forward.

“I participated in actions that in hindsight were deplorable and detrimental to the advancement of my own Black people. My actions on behalf of the New York City Police Department were done under duress and fear,” Reggie Wood, a relative read aloud at a press conference on Raymond’s behalf.

“Any evidence that provides greater insight into the truth behind that terrible tragedy should be thoroughly investigated,” said Ilyasah Shabazz, the daughter of Malcolm X.

The recent accusations echo theories raised in the 2020 Netflix documentary, “Who Killed Malcolm X?” The series followed Abdur-Rahman Muhammad, an activist and self-trained investigator who dedicated his life work to solving the civil rights icon’s murder.

Muhammad also attempts to explore an accusation that Malcolm X’s alleged killer was a Newark community leader who worshipped at a local Mosque. After the documentary aired, the Manhattan District Attorney’s office announced it review the case, with the possibility to reopen if leads proved sufficient.

Previous BBC: Trump Offered Kim A Ride On Air Force One
Next Cultist Lawyer Who Sued Pence May Face Sanctions