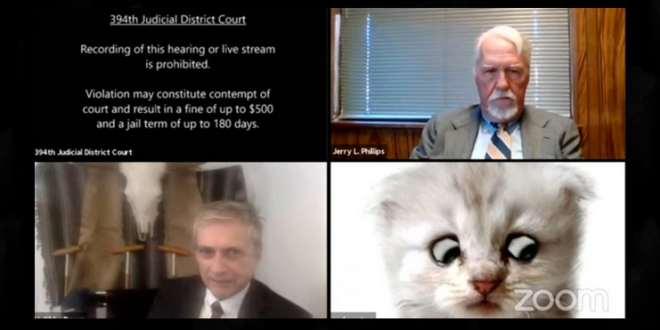 Lawyer Apologizes To Judge: “I’m Not A Cat” [VIDEO]

Judge Roy Ferguson of the 394th Texas District Court in Brewster County took to Twitter to share a link to a portion of a Zoom meeting that featured three lawyers. Two of the lawyers, Jerry L. Phillips and H. Gibbs Bauer, appeared as they do on their LinkedIn profiles.

But Ron Ponton, who is listed as Presidio County’s lawyer, looked like a robotic kitten with large, sweet eyes. “Mr. Ponton, I believe you have a filter turned on in the video settings,” a voice, likely that of Judge Ferguson, can be heard saying.

Ponton said his assistant tried to help him remove the filter but insisted that he was ready to proceed with the meeting. “I’m here live, I’m just, I’m not a cat.”

“I can see that,” responds judge pic.twitter.com/HclKlAUwbM

IMPORTANT ZOOM TIP: If a child used your computer, before you join a virtual hearing check the Zoom Video Options to be sure filters are off. This kitten just made a formal announcement on a case in the 394th (sound on). #lawtwitter #OhNo @zoom_ushttps://t.co/I0zaj0wu6K