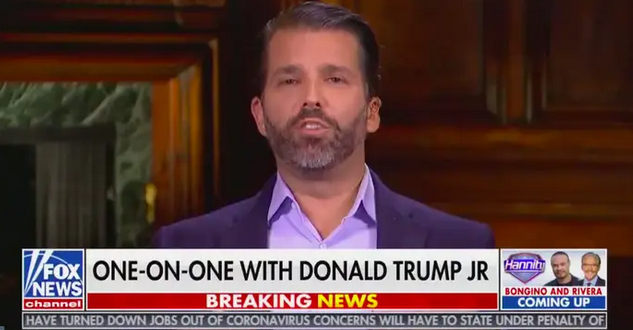 Junior: Dad Proved You Don’t Have To “Lose Gracefully”

Speaking on Fox News on Thursday, Trump said that more Republicans were not willing to stand up to Democrats and needed to act like the former president. “The Republicans aren’t willing to do it. They have shown that over the decades,” he said in an interview with host Sean Hannity.

He continued: “They’d just rather lose gracefully, I guess. That’s not really a plan that I would go with. It’s what they have done. Donald Trump has shown that you don’t have to do that. You can actually push back.”

Donald Trump Jr. says that Republicans would “rather lose gracefully” but his dad has “shown that you don’t have to do that — you can actually push back.” pic.twitter.com/InLGEJhaRM

Previous McConnell: I’ll Back Trump In 2024 If He’s Nominated
Next Boehner In Audio Book: “Ted Cruz, Go Fuck Yourself”