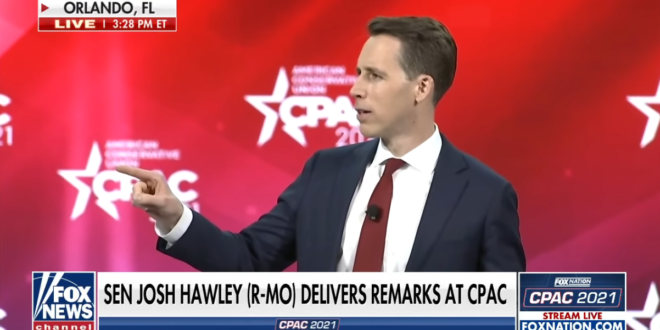 Hawley Gets CPAC Ovation For Bid To Overturn Election

Sen. Josh Hawley (R-Mo), who seemed to have become something of a pariah in the Senate since his Electoral College objections on Jan. 6 and his fist-pumping show of encouragement to a pro-Trump crowd outside the Capitol earlier that day, received a boisterous ovation at the Conservative Political Action Conference (CPAC) on Friday.

Hawley, who admits he’s not popular with his Senate colleagues, basked in the adulation of the conservative crowd, declaring “I’m not going anywhere” and noting efforts by the “radical left, their corporate allies [and] the liberal media to cancel me.”

“I’m here today, I’m not going anywhere and I’m not backing down, not a chance!” Hawley declared on stage in Orlando, Fla., his voice rising to a defiant yell.

The reaction from the CPAC crowd when Hawley says he objected to the 2020 presidential election results – prolonged applause pic.twitter.com/Bg5HLRoBhq

Will we allow fascists to win the battle for the future with all that means for humanity or will we stand up?pic.twitter.com/Do17o3G4JJ

Previous FBI: Jailed Rioter Boasted He Pissed In Pelosi’s Office
Next FBI Zeroes In On Assailant In Capitol Officer’s Death