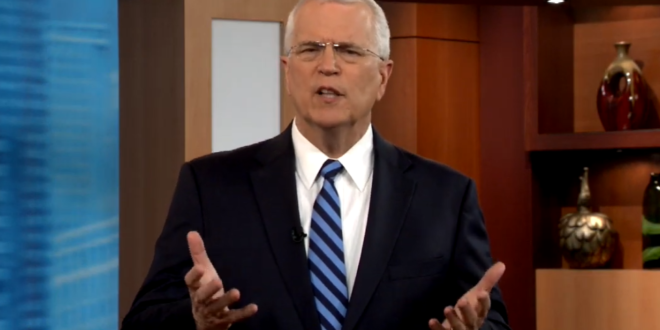 Hate Group: We Were “Canceled” By Lifetime Network

Specifically, Lifetime announced it would no longer air programming that addressed abortion or Left-wing financier George Soros. And it refused to carry any DJKM programming—even broadcasts celebrating George Washington—unless the media ministry founded in 1974 agreed to Lifetime’s sweeping new conditions.

“Because of Lifetime’s newfound ban on so-called ‘controversial’ content, D. James Kennedy Ministries has been forced off the cable channel—to which we have paid enormous fees since 2018 to air our program,” said Frank Wright [photo], Ph.D., DJKM President and CEO.

Lifetime’s sudden decision to impose severe content restrictions came after nearly three years during which the cable channel aired, without comment, Truths That Transform programs addressing abortion and other matters of concern to Christian social conservatives.

Yet in February Lifetime joined the growing number of private media firms—among them Twitter, Facebook, Google, Apple and others—who are deplatforming and silencing outspoken Christian and conservative voices.

“We will not cave to the cancel culture,” Wright asserted. “D. James Kennedy Ministries is committed to proclaiming biblical truth and defending freedom in America. We simply cannot water down our message to please Lifetime and be faithful to our mission.”

Their attack on Soros (see below) remains on YouTube. The ministry is classified as an anti-LGBT hate group by the Southern Poverty Law Center. They sued the SPLC in 2017 after they were banned from the Amazon Smile program due to the classification. The suit was dismissed in 2019 on First Amendment grounds. The ministry’s namesake, Pastor D. James Kennedy, croaked in 2007 after years of making headlines for his anti-LGBT comments.

Previous Biden Tells European Allies: “America Is Back” [VIDEO]
Next Biden To Visit Texas When It Won’t “Burden” Recovery