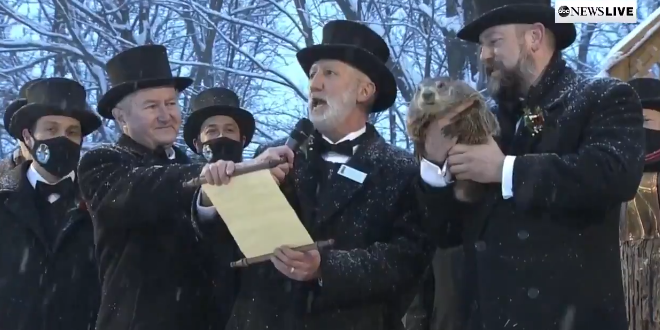 Punxsutawney Phil was pulled from his burrow in Gobbler’s Knob Tuesday morning and saw his shadow, which, according to legend, means six more weeks of winter.

Of course, even the organizers of the annual Groundhog Day event in western Pennsylvania acknowledge that turning to a large rodent for weather forecasting is mostly a way to break up winter monotony.

With snow gently falling, Phil’s handlers pulled him from a tree stump, newly installed this year, about 7:25 a.m. Tuesday. This year’s event was much more subdued because of the COVID-19 pandemic. Visitors were not allowed into Gobbler’s Knob.

Here’s some news to melt the winter blues. New York is in for an early spring, Staten Island Chuck predicted on Tuesday.

The Big Apple’s most famous marmot foresaw an end to winter misery in a virtual ceremony from the snowy Staten Island zoo. The furry oracle darted out of his burrow in search of his shadow around 8 a.m. — and didn’t see it, meaning spring is just around the corner.

The annual Groundhog Day ceremony was held without Mayor Bill de Blasio, and remotely, amid social distancing mandates and a monster snowstorm that dumped some 18 inches on the city Monday.

The video is cute.