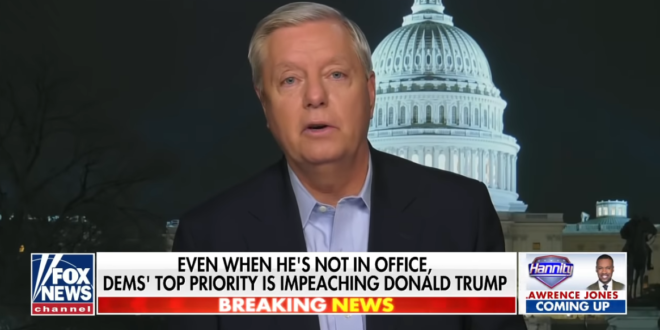 Graham: Dems Have Declared War On The Presidency

“If the House managers want to call one witness, the defense is going to call all those people you named and then some,” the South Carolina Republican said Monday on Hannity in response to a question about bringing in witnesses, including President Biden, Vice President Kamala Harris, Senate Majority Leader Chuck Schumer, House Speaker Nancy Pelosi, Rep. Maxine Waters, and Sen. Cory Booker.

He added, “To my colleagues tomorrow, there are a hundred of us — what we do today is going to make history for the rest of the time America exists. What Democrats have done is basically declare war on the presidency itself.” Republicans have argued that certain Democrats have made public comments that they argue could be considered an incitement of violence.

Previous Biden To Hold First Post-Election Town Hall In Wisconsin
Next Christian Prophet: Trump Will Be Back In WH By June