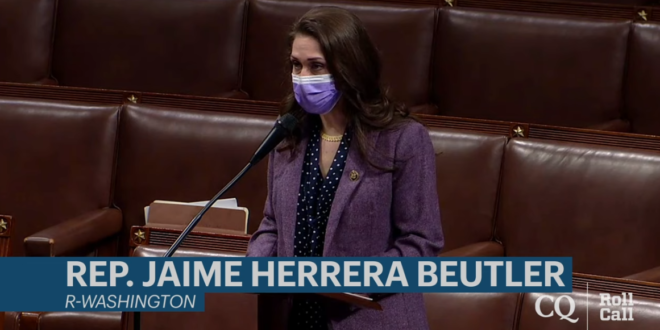 GOP Rep Urges Pence And Trump Aides To Speak Out

Rep. Jaime Herrera Beutler, one of 10 House Republicans to support Donald Trump’s impeachment for inciting the Capitol insurrection, pleaded with those close to the former president — and former vice president Mike Pence — to come forward and reveal what they know about Trump’s conduct.

“To the patriots who were standing next to the former president as these conversations were happening, or even to the former Vice President: if you have something to add here, now would be the time,” Herrera Beutler (R-Wash.) wrote in a statement released late Friday, on the eve of what is expected to be the Senate’s final vote in Trump’s impeachment trial.

Herrera Beutler issued the statement amid a new wave of attention on a story she has been telling since last month: that House Minority Leader Kevin McCarthy relayed details of a phone call he had with Trump while the violent mob was ransacking the Capitol.

NEW: A key House Republican is pleading with Pence and former Trump aides to share what they know about Trump’s behavior on Jan. 6 — tonight.

She confirmed an earlier anecdote that Trump refused to call off his supporters despite a plea from @GOPLeader https://t.co/BDp7Cbtrmd

Previous CHATTER AWAY: Overnight Open Thread
Next Steve Schmidt Resigns From Board Of Lincoln Project