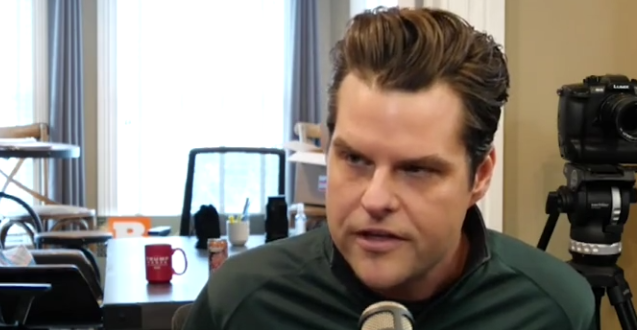 Congressman Matt Gaetz said he would give up his seat in the House if asked to defend President Donald Trump in the upcoming impeachment trial. “The President so far has gotten a low-energy defense,” Gaetz said in an interview with War Room.

Gaetz said it’s important to show how President Trump’s concerns about the presidential election were valid, and urged Republicans to go on offense since 45 Republicans are already on the record that the impeachment is unconstitutional. Stephen K. Bannon said it’s a “free play” to show the receipts on election fraud.

No links because fuck those seditionists. Last month it was reported that Gaetz is facing discipline by the Florida Bar over his support for overturning the election. He previously faced sanctions for threatening the family of Michael Cohen.

Previous Tuberville Issues Laughable Dodge On QAnon Rep
Next Christian Prophet: Trump “In Legality” Is Still President And A Talking Scroll In Heaven Will Soon Prove It To All