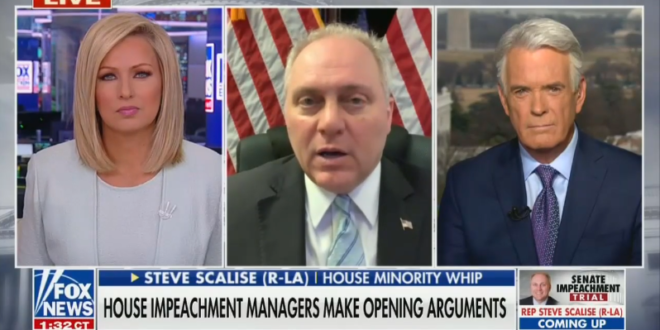 Fox Dumps Trial Coverage To Interview Scalise, Who Wants To Know Why Democrats Aren’t Being Impeached

Despite history unfolding in real-time, a curious programming decision was made by those in charge of America Reports with John Roberts & Sandra Smith: they cut from House Manager Rep. Ted Lieu and chose to amplify the words of House Minority Whip Rep. Steve Scalise, who, shockingly, presented a damning and partisan perspective for Fox News viewers to consume. So, to be absolutely clear, while gripping and historic events were unfolding live, someone at Fox News thought, Let’s bring in Steve Scalise.