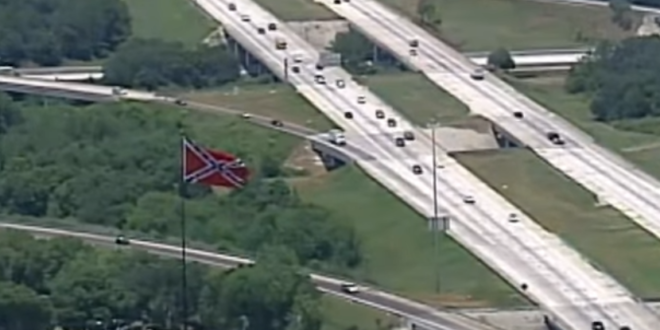 A man who bragged of tricking local Florida officials into letting him fly a massive Confederate flag at the corners of two busy interstates has died, authorities said. Police said officers found 73-year-old Marion Lambert dead on his small farm in Tampa on Wednesday.

In 2017, Lambert told The Associated Press during an interview that he tricked the county several years ago, when he bought a sliver of land near Interstates 4 and 75.

When he asked county officials for a permit, he said he planned to build “a memorial to American veterans.” “I tricked them,” he said. “If they had done any research they would have known who I was.”

Read the full article. Foul play is not suspected. Lambert raised $250,000 to place granite markers on the site before installing a 30-by-50 foot flag that can be seen by motorists for miles in every direction. The video below is from 2015.