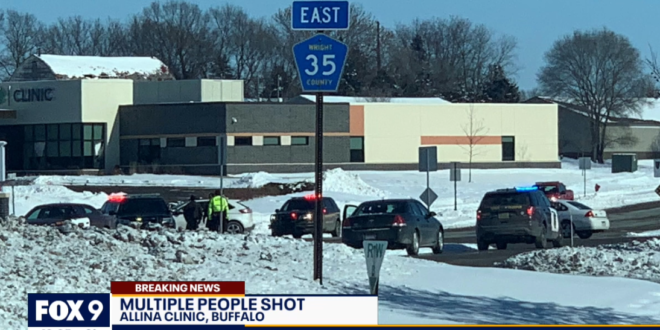 Gunshots erupted at a health clinic in Wright County late Tuesday morning followed by a bomb exploding, and at least five people were reported to be wounded by the gunfire.

The scene is the Allina Health Clinic in Buffalo on Crossroads Campus Drive, according to police, who were called there about 10:55 a.m. Up to five people are said to be wounded, and a male suspect has been detained, according to emergency dispatch audio.

About 30 minutes later, a bomb went off in the family medicine and urgent care clinic, the dispatch audio revealed. That explosion forced responding emergency medical personnel to relocate, the audio continued.

UPDATE: I’ve edited the original headline now that the original reports of multiple bombs have been contradicted by authorities.

Horrifying reports of gunfire and a bomb at the Allina Clinic in Buffalo. Targeting those who dedicate their lives to saving others is as heartbreaking as it is appalling. Praying for the injured, their families, and our community. https://t.co/y21ogVo6VB

UPDATE: According to dispatch audio, four homemade bombs were detonated inside the Allina Health Clinic. https://t.co/lZSS1T6lCd

#BREAKING⤵️ from a member of our @FOX9 News team. One law enforcement source describing scene to me as a “disaster.” Gunfire, bombs, multiple victims. Been told metro area agencies en route to assist. https://t.co/ZZWHI8Zir3