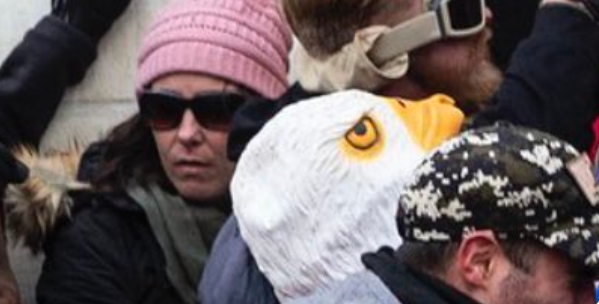 The FBI raided the home of Rachel Powell, a Mercer County mother of eight suspected of playing a role in the assault on the U.S. Capitol. NewsChopper 2 flew over Powell’s Sandy Lakes home Thursday afternoon.

The FBI says it was conducting court-authorized law enforcement activity there. They’re looking for Powell, who is nowhere to be found.

Powell can clearly be seen in videos taking a battering ram to the Capitol in the Jan. 6 assault, and though the FBI has posted pictures of her seeking the public’s help, it still has still not officially confirmed they are of Powell.

FBI raids Mercer County home of woman suspected in Capitol assault. “We are conducting court authorized law enforcement activity at that location. We are seeking the whereabouts of Rachel Powell.” @KDKA pic.twitter.com/jBreTvlAse

NEW: “Bullhorn Lady,” one of the FBI’s most wanted after she battered windows and issued orders at the capitol, is Rachel Powell, a mother of eight from rural PA. Her path to radicalization, and what it reveals about extremism in America: https://t.co/UxRMQ3e5X0