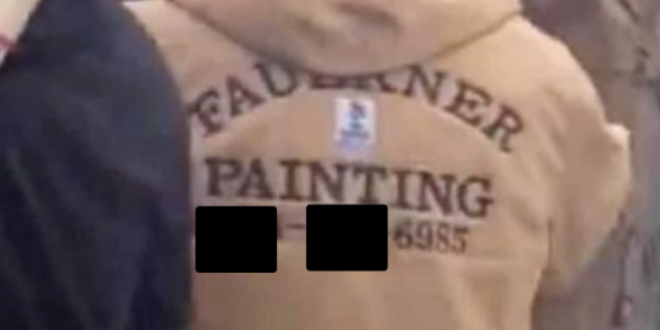 FBI Collars Man Who Wore His Phone Number To Riot

They had his number. Federal authorities identified an Ohio man as a Capitol invader by merely looking at the name and number on the jacket his wearing while storming the Capitol and kicking in a window. As a result, Troy Faulkner, 39, now faces several federal charges.

The FBI said that it saw Faulkner on a YouTube video kicking in a Capitol window. But before that happened, the defendant was facing away from the camera and his jacket was exposed. This was important because that was a jacket identifying his painting business.

Read the full article. Last week it was reported that another rioter was nabbed because he wore his high school jacket bearing the number of his team jersey.

Genius Wore Jacket with His Company’s Name and Phone Number on It While Storming the Capitol, Kicking in Windowhttps://t.co/yMmfPAuuY4

*Troy E. Faulkner of Whitehall, Ohio, is arrested in Capitol riot.
*Photos collected by FBI show him kicking out window at Capitol.
*Wore jacket with “FAULKNER PAINTING” and a phone number boldly printed.
*He wasn’t hard to find.https://t.co/TdOsvILC16 pic.twitter.com/jtT8Mi7E62

Previous Some Who Stormed The US Capitol Didn’t Even Vote
Next LIVE VIDEO: White House Briefing On Vaccine Efforts