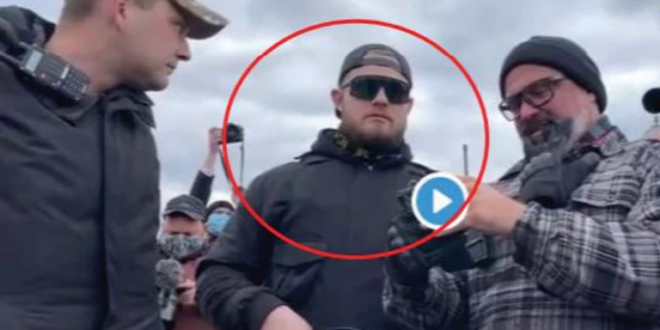 Federal authorities have announced another arrest connected to January’s siege on the U.S. Capitol Complex. Authorities are using the case against Ethan Nordean, a.k.a. Rufio Panman, who is said to be a member of the far-right organization the Proud Boys, to allege that members of his group planned to storm the Capitol Building ahead of time.

Nordean, whom officials referred to as “the self-described ‘Sergeant of Arms’ of the Seattle Chapter of the Proud Boys,” was apparently a fervent believer in Trump‘s debunked claims of widespread voter fraud, judging by conversations cited in the affidavit. For example, authorities said that Nordean posted a link on his Parler page leading to his video podcast.

Nordean faces four federal counts including obstruction of an official proceeding: the certification of the Electoral College votes. That charge carries a maximum sentence of 20 years in prison. Other charges include aiding and abetting individuals who “removed barricades and broke windows to storm the Capitol building,” knowingly entering or remaining in a restricted building or grounds, and violent entry and disorderly conduct on Capitol grounds.

An FBI affidavit in support of the complaint states, “Photographs and digital videos taken on January 6, 2021, show that Nordean was among those who entered the U.S. Capitol building after rioters forced entry and pushed past Capitol Police officers. Photographs and video also show that Nordean was near the front of the crowd of rioters, who collectively approached, stood off against, and vastly outnumbered Capitol Police.”

Member of Proud Boys Charged with Obstructing an Official Proceeding, Other Charges Related to the Jan. 6 Riots https://t.co/LJQglmvAdt

Ethan Nordean, who is also known as Rufio Panman, is at least the eighth defendant linked to the Proud Boys facing federal charges.https://t.co/xbxsXnria4