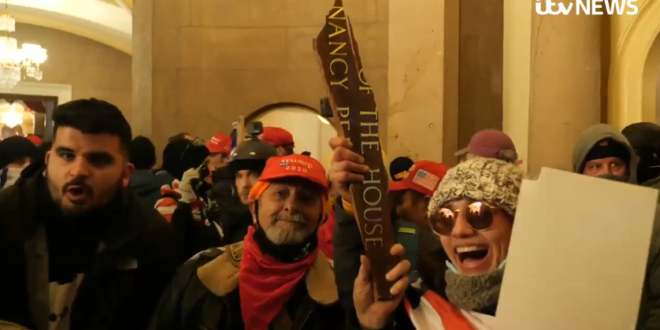 The uncle of a Missouri woman accused of participating in the riot at the U.S. Capitol last month is now facing charges himself. A federal complaint against William Merry Jr. of St. Louis County was unsealed late Thursday. Merry is the uncle of Emily Hernandez, 21, of Sullivan, who was charged on Jan. 16.

A charging document says video and photos show both Hernandez and Merry, wearing a “Trump 2020” hat, holding a broken piece of the nameplate from outside House Speaker Nancy Pelosi’s office. The document says several tipsters provided information that helped lead to Merry’s arrest.

Merry’s lawyer, Ethan Corlija, said Merry was taken into custody Thursday after police searched his home. He said Merry, who is in his 60s, looks forward to “one day being able to get past this.”

Previous Dobbs Retweets Praise From Trump, Attacks On Fox
Next Hillary Clinton Weighs In On QAnon And Greene