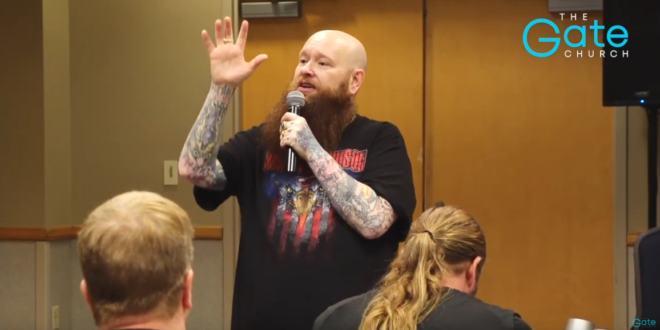 Approximately one year after a team of evangelical leaders declared him “not qualified” for leadership due to “credible” allegations of “ungodly and immoral behavior,” including predatory sexual activity, Fresh Fire USA leader Todd Bentley says he’s now back after hearing from God.

He alleged that Bentley “has an appetite for a variety of sexual sins, including both homosexual and heterosexual activity” and accused the evangelist of indulging in an open marriage with his wife, Jessa.

Read the full article. Bentley says he’s been visited by angels and spoken directly with God, who declared him fit to return to scamming the rubes.

Bentley last appeared on JMG in 2019 when he was accused of harassing young men for “paid sex.”

He was then denounced by a “senior leaders in the body of Christ,” including anti-LGBT activist Michael Brown.

Bentley first appeared on JMG in 2013 for this quote:

“They brought a woman that had been to all the witch doctors and all the magic soothsayers and whatever she could do to get healed because she had breast cancer. As she was standing in the crowd, the power of God came all over her and she grew a brand new breast. Right after that, they brought two more people onto the platform. The woman was born without the parts that a woman needs, and the man as well because of a cancerous tumor. Both of them were instantly healed.”

Previous Parkland Mom Begs QAnon Rep To Publicly Disavow Insane Lies About “Staged” Mass Shootings At Schools
Next Alex Jones: Secret Service “Provocateured” Violence At The Capitol So That Trump And I Get Blamed [VIDEO]