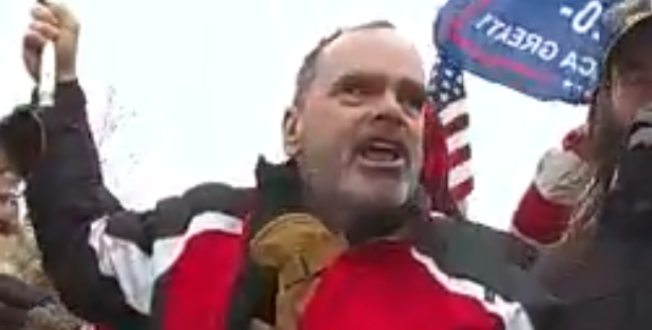 A retired NYPD officer who had been assigned for a time to work perimeter security at City Hall and at Gracie Mansion, the mayor’s official residence, has been accused of using a pipe to attack U.S. Capitol officers during the Jan. 6 siege, law enforcement officials told News 4 Tuesday.

Webster does not deny he was the man in the red jacket seen in FBI-circulated video and imagery, his lawyer said. But he said his client has no history of political activism and deserves”fair bail.”

New Photos: #FBIWFO is seeking the public’s assistance in identifying #145-AFO who made unlawful entry into the US Capitol & assaulted law enforcement on January 6th. If you have info on #145-AFO, call 1800CALLFBI or submit info to https://t.co/t8G7LO4hxu https://t.co/sX0CawLmee pic.twitter.com/BcKR9zxk8x

ARRESTED: Thomas Webster AKA #EyeGouger is a retired NYPD Cop who had been assigned for a time to work perimeter security at City Hall and at Gracie Mansion, the mayor’s official residence. https://t.co/3BLHdWdMc9 pic.twitter.com/HWmIvGHR6u

Retired NYPD officer, Thomas Webster, dubbed the ‘eye gouger’ has turned himself into the FBI after his Manhattan apartment was raided. He, as seen in the photo, attempted to gauge the eyes of a Capitol police officer and swung a pipe at officers. Well done folks. pic.twitter.com/HQzjCmfjZ0

ARRESTED: Thomas Webster AKA #EyeGouger is a retired NYPD Cop accused of attacking Capitol Police with a pipe and gouging out their eyes. Webster’s attorney, James Monroe, declined to comment Tuesday. pic.twitter.com/cwnADdlaqn

"The undercurrents of political hostility" and other factors that led a "person who led an exemplary life" are still with us—but he's not a flight risk. "My determination in favor detention is based solely on the issue of danger to the community."

Above tweet is a bit unclear before the dash.

Essentially, the judge believes that Webster could be riled up again. He specifically mentioned that something like the events of Jan. 6 "could happen again."