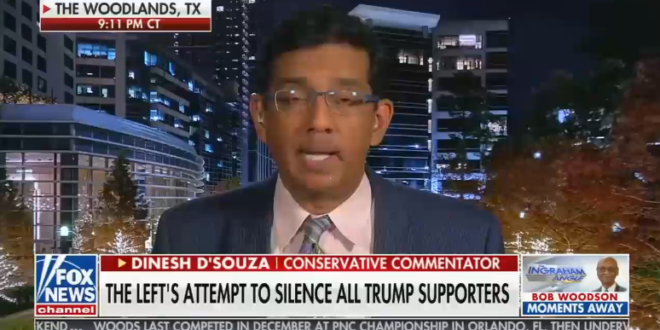 D’Souza: There Was No Insurrection At The Capitol, It Was Just “Rowdy People Walking In A Hallway” [VIDEO]

They had this whole big narrative going right after January 6, and that narrative has completely collapsed. There was no insurrection, there was no coup. As you mention, the only shot fired in the Capitol on January 6 was the shot fired by a policeman into Ashli Babbitt’s neck.

They tried very hard the New York Times was the chief culprit in making up the story about Brian Sicknick, now they knew that the story was a lie from the beginning, and the reason is that there is plenty of video of what was happening all over the Capitol.

And yet you will notice there never was any video of Brian Sicknick being hit on the head with a fire extinguisher. The New York Times made that up, attributed to unnamed sources and never published a correction, they just later said, “well the story has been updated because there’s been new facts that have come in.”

The truth of it is they tried to construct a false narrative and now that that false narrative has imploded they’re moving to the, let’s call it the white supremacy narrative, which is equally bogus.

As we move further and further away from the Jan. 6 insurrection, we will continue to see this kind of revisionism from the right.

Dinesh D’Souza: “In reality, this was a bunch of rowdy people walking through a hallway.” pic.twitter.com/LnDGE3F5sg