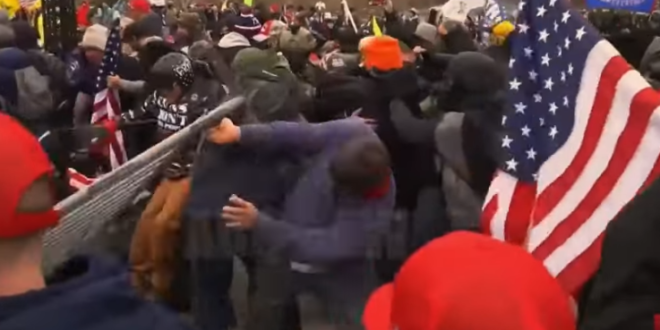 House Democrats opened their case Tuesday to convict Donald Trump of inciting an insurrection with a montage of harrowing scenes of violence wrought by the former president’s supporters during the Jan. 6 insurrection at the Capitol.

Though the footage has been well-worn since that day, the House’s prosecutors spliced together the most violent and chaotic images, intertwining them with Trump’s own remarks encouraging supporters to march on the Capitol.

The shocking footage — which included the shooting death of rioter Ashli Babbitt and the assault of numerous police officers — forced senators to relive the moments when many of them fled the violence, fearing for their own safety.

Updated story — ‘They could have killed all of us’: Trump trial opens with gripping footage of Capitol violencehttps://t.co/VKPklAeqjJ

House impeachment manager Rep. David Cicilline: “This was a disaster of historic proportion…and make no mistake about it, as you think about that day, things could have been much worse. As one senator said, they could have killed all of us.” https://t.co/Lau7kmD368 pic.twitter.com/K42jVujGqv

Democrats kick off impeachment trial with video of Jan. 6, showing Trump’s remarks at the rally followed by the violent and deadly insurrection in the Capitol.
“Senators, the president was impeached by the U.S. House of representatives January 13th for doing that,” Raskin says pic.twitter.com/YOA75QXEnc

Previous Five Wounded In Mass Shooting At Minnesota Clinic
Next Lawyer Apologizes To Judge: “I’m Not A Cat” [VIDEO]