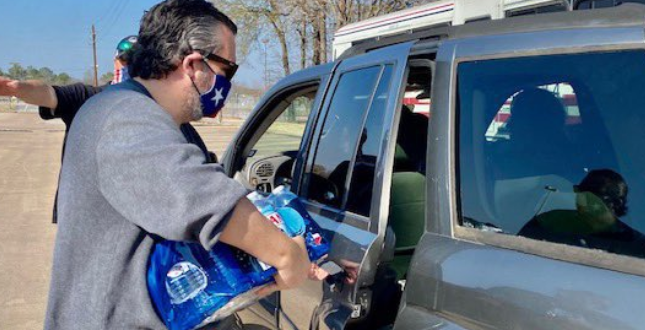 Late on Saturday night, Senator Ted Cruz (R-TX) tweeted three photos of himself helping out fellow Texans while the state continues to deal with the aftermath of freezing temperatures, widespread power outages, and a water shortage. But the post captioned, “#TexasStrong,” didn’t sit well with many Twitter users, who promptly called him out due to the senator’s family vacation to Cancun, Mexico earlier in the week.

I’m glad someone in Ted Cruz’s Senate office finally instructed him on how to fake compassion, humanity, and creating the illusion that he cares about the people he was elected to serve. https://t.co/6JuuzUzpf2

.@AOC has used her social media to raise more than $4 million for the people of Texas. Ted Cruz used his to share a photo op of him placing a single case of water into a car. https://t.co/T15yQqXhWX

It should also be pointed out that Ted Cruz was IN MEXICO and should, per CDC guidelines, be quarantining in his home. https://t.co/FOIUWobYTG

Poor Ted really wanted to be at the luxury resort instead of doing this actual constituent service. https://t.co/WDZMLgWQoa