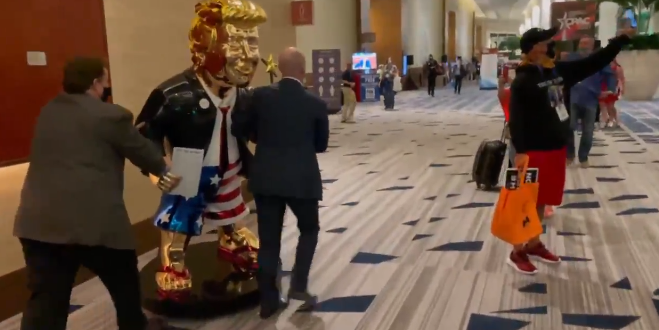 CPAC’s Golden Idol Of Trump Was Made In Mexico

Tommy Zegan says he was inspired to create the enormous gold statue of Donald Trump because he felt that other less flattering statues of the president were not doing him justice. Made of painted fiberglass, the statue was assembled in Mexico and painted in Tampa, Florida. It’s for sale for $100,000.

Zegan says he also made a stainless steel version, which he hopes to one day be displayed in the Trump Presidential Library (“It’s priceless,” he says).

He’s working on a third Trump statue — one he says “is gonna really piss off the liberals” — which will be crafted from bronze plated with 24-karat gold. He plans on selling that statue at Sotheby’s or Christie’s, for “probably about $10 million.”

Previous Schlapp: CPAC Heals The Upset Over Trump’s Silencing
Next REPORT: Guilfoyle Urged To Run For Office In California