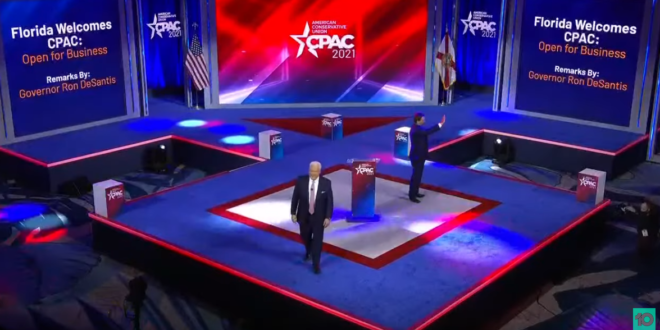 The Conservative Political Action Conference (CPAC) was underway in late February 2021 in Orlando, Florida, complete with a golden statue of former U.S. President Donald Trump. And it wasn’t long before controversy unfolded.

Eagle-eyed social media users claimed that the stage where Sen. Ted Cruz, Donald Trump Jr., and others made speeches looked eerily like a Nazi or white supremacist symbol.

The shape of the stage, a diamond with two prongs extending on one end, is indeed similar to an early European Othala rune also known as the “Odal rune.” According to the Anti-Defamation League this is a popular Neo-Nazi symbol.

Read the full article. Snopes is rating the claim “unproven” because they don’t know the intent of the stage designer.

Stage design conspiracies are outrageous and slanderous. We have a long standing commitment to the Jewish community. Cancel culture extremists must address antisemitism within their own ranks. CPAC proudly stands with our Jewish allies, including those speaking from this stage.

Having worked with Norse and Elder Futhark iconography for years, I’m quite alert to the glyph shapes and their associations in the modern world and history.

So, why is the #CPAC2021 stage an Odal rune, and specifically one with serifs (or wings) that was used by the SS? pic.twitter.com/gc4HhtGA3n

Neo-Nazis have been using the Odal Rune sign in place of the swastika for several years.

CPAC’s stage is the same shape.

The pic on the left is from Charlotteville in 2017. pic.twitter.com/6Ylt2U4U3C

The CPAC stage was intentionally built in the shape of a despicable Nazi symbol—the Odal Rune worn by the Nazi SS in WWII. This was not an accident, but rather an overt signal to white nationalists to stand back and stand by. #GOPDomesticTerrorists pic.twitter.com/1ydHnbiPui

Given the observations about the shape of the stage at CPAC, I’m reupping @jasonintrator‘s piece on the movie shown at the Ellipse before the Jan. 6 insurrection. It’s not a coincidence, folks https://t.co/09B6Xwj7Kw