Christian App: Find Out When Someone Prays For You

New research suggests that even as churches and other religious gatherings have been closed during lockdown, there’s been a big increase in people turning to prayer and other forms of spirituality.

The free ChatPray app is being launched today in response to those needs. The app has been specifically designed as an intuitive way to help people connect with friends and family in prayer. With ChatPray, users can get notified that someone is praying for them right now.

Where existing chat apps have only a single thread of messages for each friend or group relationship, ChatPray always has two channels – a regular chat channel and a second “pray” channel to express the more important things. Every entry in the “pray” channel gets a “pray” button which, when pressed, increments a prayer counter.

More importantly it sends a notification to the author and anyone “@mentioned” in the prayer, to let them know they’re being prayed for. Prayers can be marked as “answered” too.

When they are, a notification is sent to anyone who has ever prayed that prayer. ChatPray is designed to be as familiar and intuitive as WhatsApp but without requiring the mass of private data WhatsApp now seeks. 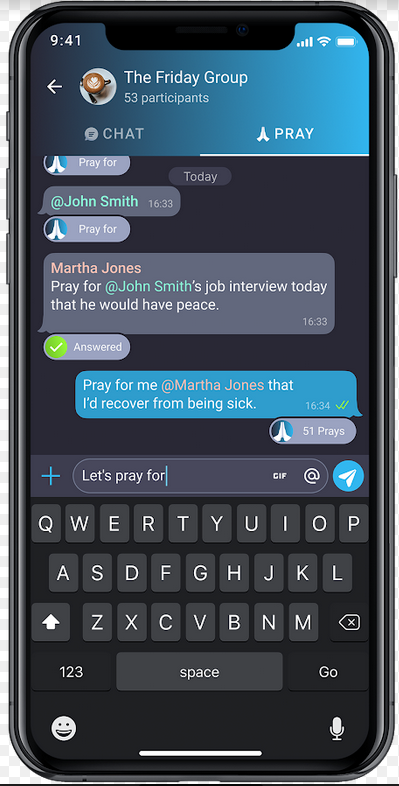