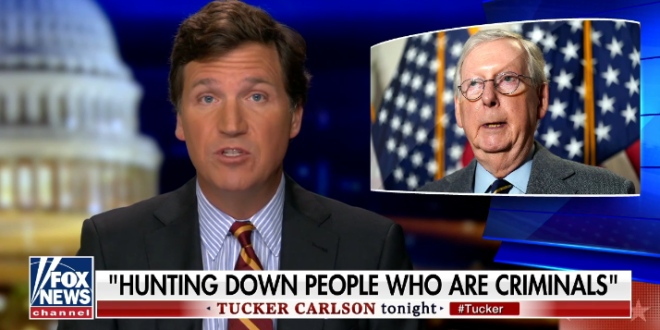 We need a new war against our own population. And not surprisingly, that is exactly what they are calling for. Hunt them down like Al Qaeda. And to be completely clear, we are not over stating this. We are not hysterical. We’re just close listeners.

By “them” they mean Americans who were nowhere near the Capitol on January 6, had no role in what happened that day, and didn’t support it. That’s the assessment from a former CIA official who spent years hunting Al Qaeda in the Middle East.

No one in Washington appears to think this kind of talk is alarming in a formerly peaceful republic like ours.

Just today, Sen. Mitch McConnell, the leader, sent out a tweet blasting Vladimir Putin for some misdeed or other. In the U.S. Senate, Russia is still the real threat. Not quite as upset about China somehow.

But what McConnell didn’t mention and almost never does are his own voters the ones now being re-classified as the Al Qaeda terrorists and treated accordingly.

Previous Kinzinger Blasts GOP Ovation For QAnon Rep [VIDEO]
Next Ohio Covidiots Testify For Bill To Strike Down COVID Protocols: I Can’t Even Get My Favorite Cheesy Bread