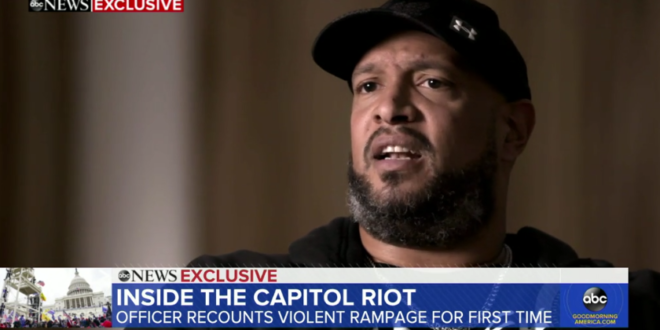 Capitol Police Officer Harry Dunn is speaking out for the first time about what he experienced when a mob of Trump supporters invaded the building. Dunn gave an interview to ABC’s Pierre Thomas, offering recollections on the chaos of January 6th, the physical exhaustion of the insurrection, and the tension of his stand-offs with the crowd.

Dunn went on by calling the insurrectionists “terrorists,” saying “a large number of people in that crowd were racists,” and that “I got called a [N-word] a couple dozen times today protecting this building.” “I sat down with a good friend of mine, I said, is this America? What the hell just happened?” Dunn said.

“IS THIS AMERICA? THEY BEAT POLICE OFFICERS WITH BLUE LIVES MATTER FLAGS. THEY FOUGHT US. THEY HAD CONFEDERATE FLAGS IN THE US CAPITOL. THEY STORMED THE SPEAKER’S OFFICE..THEY WERE TRYING TO ASSASSINATE THE VICE PRESIDENT, IN THE CAPITOL.” Capitol Police Officer Harry Dunn to ABC

Officer Harry Dunn, one of the Capitol Police officers who faced the rioters on 1/6, speaking to ABC: “They were terrorists. They tried to disrupt this country’s democracy — that was their goal.” https://t.co/A7Ok42Q4ni

“I got called a [N-word] a couple dozen times today protecting this building,” says Harry Dunn, a Capitol Police officer, who was on the front line against pro-Trump rioters https://t.co/PAElfTIElv