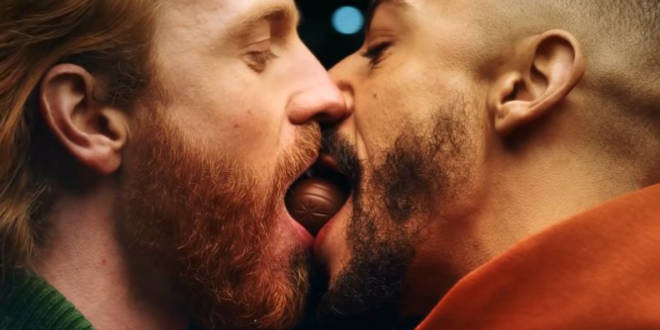 A petition calling for the immediate removal of an ad featuring a real-life gay couple sharing a sticky kiss is being turned down by British confectionery Cadbury. Earlier this week, the CitizenGo Foundation, a Christian organization that demands “respect for the dignity of human beings,” posted on its website a petition directed at Cadbury U.K. and the Advertising Standards Agency, the country’s body that regulates advertising.

According to the CitizenGo petition, “in a show of affection, the couple uses their lips and tongue to exchange the contents of a creme egg; an image which many consumers have complained is both disgusting and off-putting.” As of Friday afternoon, the petition had collected more than 27,000 signatures “asking the Advertising Standards Agency to withdraw this advert straight away!”

Cadbury gave Premier this statement: “Cadbury has always been a progressive brand that spreads a message of inclusion, whether it is through its products or brand campaigns. We are proud of our Golden Goobilee advert which celebrates the many ways that everyone can enjoy a Cadbury Creme Egg. To illustrate this and showcase the joy our products bring, a clip of a real life couple sharing a Cadbury Creme Egg was included in the advert.”

CitizenGo was founded in Spain in 2013 and US hater Brian Brown sits on their board. One Million Moms raged about the ad last month. Cadbury is owned by US-based Mondelez International, formerly Kraft Foods.