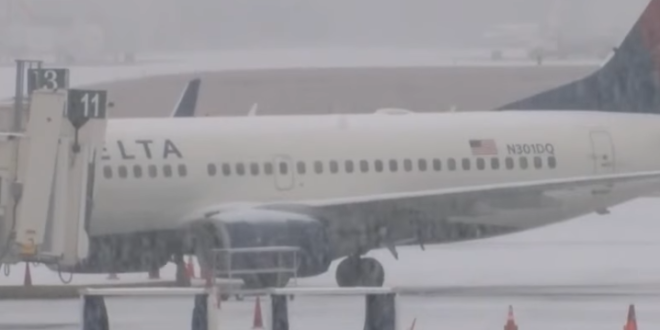 Flights out of Kennedy, LaGuardia, and Newark Airports were cancelled as the blizzard gained steam Monday morning.

While a few flights were able to take off in the early morning around 6:00 a.m., nearly every flight out of JFK was cancelled or delayed after 7:30 a.m., according to a website that tracks departures from the airport.

The story was the same at other airports around the region, with every flight from 9:40 a.m. on cancelled out of LaGuardia Airport. Out of Newark Airport, all the flights were cancelled as well starting at 9:40 a.m.

There is currently 1 flight bound for New York area airports (JFK, LGA, EWR). Heavy snow and strong winds have lead to the cancellation of nearly all flights through at least the rest of the day.

Snow has blanketed NYC as a major winter storm makes its way from the Midwest to the East Coast. More than 100 million Americans, from Minnesota to Maine, were under winter weather alerts Sunday 🌨 pic.twitter.com/bZATjulMC3