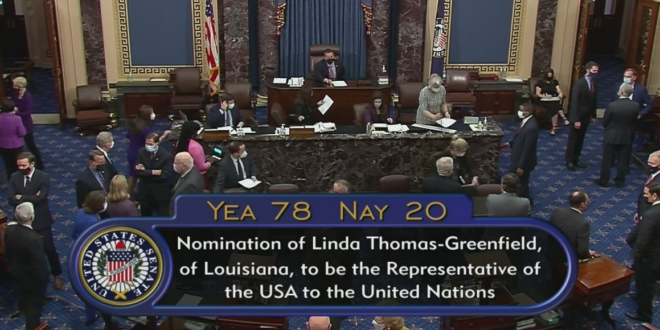 Ms. Thomas-Greenfield’s confirmation, by a vote of 78 to 20, comes as Mr. Biden’s administration seeks to become a more active force in the United Nations after American retreat during the Trump administration. Her new position is the latest chapter in a rise that started in her birthplace of Louisiana, where she attended segregated schools and experienced a childhood, in the early 1950s, punctuated by racial tension.

As America’s top representative to the United Nations, Ms. Thomas-Greenfield, 68, has said she will set about restoring alliances and re-engaging in multilateral efforts to address global problems like the coronavirus pandemic. “America is back,” Ms. Thomas-Greenfield said when Mr. Biden announced her nomination in November, echoing a theme of Mr. Biden’s in talks with other world leaders.

By a vote of 78-20, the U.S. Senate has confirmed Linda Thomas-Greenfield to become the next U.S. Ambassador to the United Nations. She’s expected to present her credentials to UN Secretary General Antonio Guterres on Thursday. pic.twitter.com/eThvtcy8US

All 20 Senators voting No on Linda Thomas-Greenfield’s confirmation to be US Ambassador to the UN were Republicans including Cotton, Cruz, Hawley and Rubio. https://t.co/Q8JQ7nI858 pic.twitter.com/YF7A3bHM7C