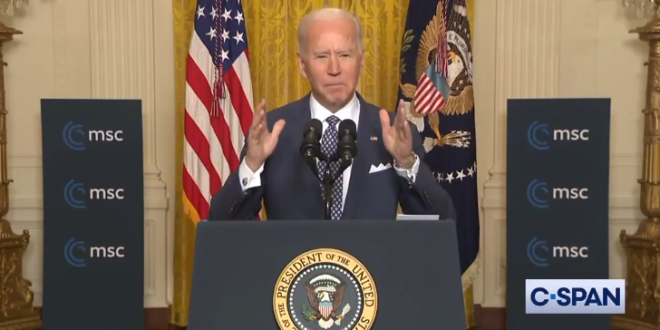 President Biden on Friday gave his first speech since taking office aimed at an international audience. Making the case for his plans to turn the page on former President Donald Trump’s “America First” ethos, Biden declared: “America is back” to the virtual crowd at the Munich Security Conference — a who’s who of global national security officials.

The president also vowed to the nation’s traditional allies that the United States is ready to work with them on issues ranging from arms control, COVID-19, cyberhacking and climate change.

President Biden: “America is back. I speak to you today as the president of the United States at the very start of my administration, and I’m sending a clear message to the world: America is back.”

President Biden: “America is back. The transatlantic alliance is back. And we are not looking backward. We are looking forward together.”

Previous Hotel Staff Dish The Dirt On Serving The MAGA Elite
Next Hate Group: We Were “Canceled” By Lifetime Network