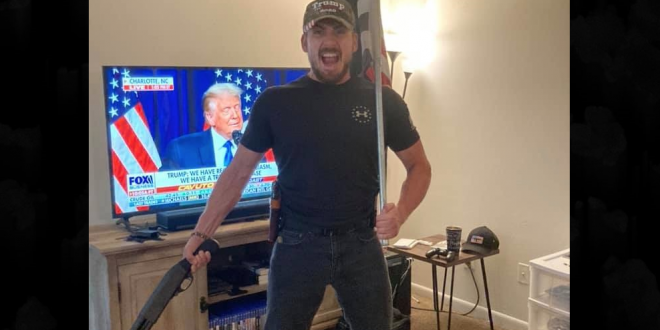 A self-described “hidden patriot” from Nashville, outed on social media as a rioter who invaded the U.S. Senate chambers Wednesday with a weapon and zip-tie handcuffs, was arrested Sunday on federal charges, NewsChannel 5 has learned. He was booked into a Nashville jail at 2:50 p.m.

FBI agents took Eric Gavelek Munchel, age 30, into custody on a federal arrest warrant charging him with one count of knowingly entering or remaining in any restricted building or grounds without lawful authority and one count of violent entry and disorderly conduct on Capitol grounds.

A US Capitol rioter caught on camera menacingly clutching disposable restraints while sporting paramilitary gear is a former bartender from Nashville who stormed the Senate with his mom, according to a report Sunday.

Eric Munchel, 30 — photographed holding the zip-tie-like handcuffs while he climbed over press gallery chairs — said he and his 57-year-old mother, Lisa Eisenhart, breached the building, according to the Times of London.

“We wanted to show that we’re willing to rise up, band together and fight if necessary. Same as our forefathers, who established this country in 1776. It was a kind of flexing of muscles,” said Munchel, who wore a bulletproof vest during the riot.

After many contributions from people following this thread we now have confirmation that zip-tie guy is Eric Munchel, of Nashville, TN.

We have a very strong identification for #ZipTieGuy. Have referred it to the @FBI. Not releasing publicly yet.

However, you should know that;

BREAKING: He’s being named by others now, so I can confirm results of the investigation: Eric Munchel from Nashville TN is #ZipTieGuy

His social media has now been locked down, but many of his posts are disturbing and include glorified violence. pic.twitter.com/xachNOyPLf

🚨BREAKING: reports that Eric Munchel (aka Male #1) was arrested by @fbi in Tennessee.

Lucky for him he already likes handcuffs.

We don’t if a tip to the FBI played a role, but be proud if you contributed to ANY identification effort. THREAD

One of the insurrectionists with zip ties, Eric Munchel, was arrested in Nashville. He drove to DC with his mother, Lisa Eisenhart, a nurse.

She came to DC ready for “revolution” and to die. https://t.co/HZdzPiRPMv pic.twitter.com/p05GCLiLCj