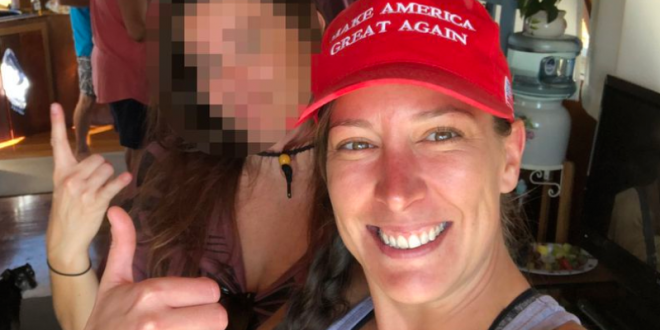 The 45-second clip posted to Twitter opens with several rioters attempting to break down a door in the halls of the Capitol, barricaded against the invaders with furniture.

Through the door’s shattered windows, a single lawman can be seen, his service weapon raised and trained on the horde outside. “Bust it down!” one man yelled from the crowd.

About nine seconds in, the cop stepped forward and fired a single shot, striking Ashli Babbitt, who, another video clearly shows, was attempting to climb through the door’s blown-out window pane. Babbitt fell backward, landing motionless on the Capitol floor as her fellow rioters screamed and backed away from the window.

The police officer who shot and killed an invading Air Force veteran during the riot inside the U.S. Capitol was placed on administrative leave Thursday pending an investigation of the deadly encounter, officials said.

Chief of Police Steven Sund announced the move one day after Ashli Babbitt, an ardent supporter of President Trump, was fatally wounded as rioters entered the building armed with metal pipes, chemical sprays and other weapons.

The shooting occurred as the horde forced their way toward the House Chamber where members of Congress sought refuge during the building’s occupation by supports of President Trump, he said. The officer will remain on leave pending an investigation by the Capitol Police and the local police department.

The second clip below must be viewed at YouTube.

Previous Lawyer Tells Judge He Can No Longer Represent Trump In PA Case: My Work Was Used To “Perpetuate A Crime”
Next Transportation Sec. Elaine Chao To Resign Over Riots