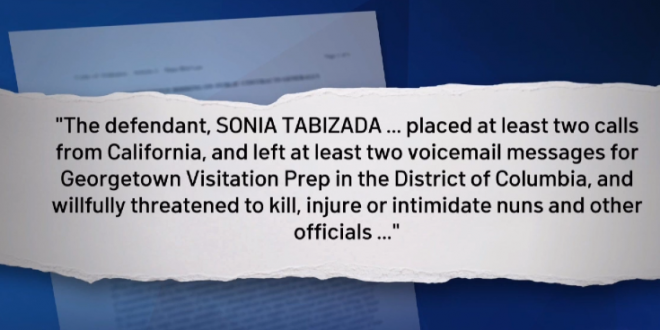 The Justice Department announced today that Sonia Tabizada, age 36, of San Jacinto, California, pleaded guilty in federal court to intentionally obstructing persons in the enjoyment of their free exercise of religious beliefs by threatening to bomb the Georgetown Visitation Preparatory School in Washington, D.C., in violation of Title 18, U.S. Code, Section 247.

In May 2019, school officials announced that Visitation Prep, the oldest Catholic school for girls in the country, would begin publishing same-sex wedding announcements in its alumni magazine to advance its teaching that “we are all children of God … worthy of respect and love.”

According to the plea agreement, Tabizada learned of this announcement and made multiple calls threatening violence in response to the school’s decision. On May 15, 2019, Tabizada left a voice message stating that she was going to burn and bomb the church.

“Every citizen and community has the Constitutional right to exercise their own religious beliefs free from fear and discrimination. Defending civil rights is a top priority for the FBI and we will continue to work to protect the civil rights and freedoms granted to all Americans.”

Tabizada will be sentenced at a hearing scheduled for March 23, 2021. She faces a maximum penalty of 20 years in prison, three years of supervised release, and a fine of up to $250,000.

Approximately one minute later, she allegedly left another voice message, saying, “What kind of pervert priests do you guys have running the show? Nobody cares for those girls? You’re crushing the innocent, motherfucking asshole. I’m gonna fucking blow up the school and call it a mission from God. You guys are going to get terrorism within your fucking school, motherfucker. And you’re going to be guilty. And I warned you!”