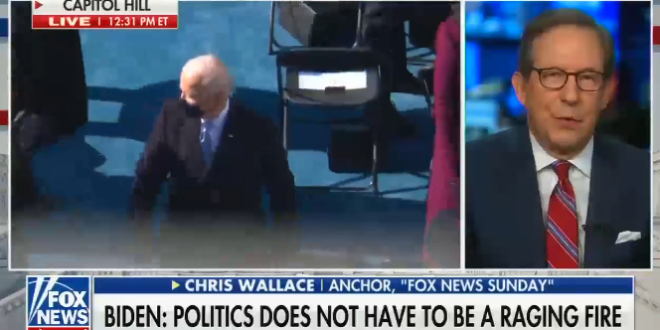 Following Biden’s powerful address in which he declared “democracy has prevailed” and called upon Americans to “end this uncivil war,” the 73-year-old Wallace turned to his Fox colleagues and likened it to all the other presidential speeches he’s witnessed over the years, including that of President John F. Kennedy in 1961.

“I thought this was the best inaugural address I have ever heard,” he flatly stated.

“A lot of this event today, a lot of the president’s speech, was colored by the emotion of the fact that exactly two weeks ago, 14 days ago, there was a mob, a buzz of insurrectionists, of domestic terrorists on the inaugural stand.”

Fox News’ Chris Wallace: “Martha, I thought it was a great speech. I have been listening to these inaugural addresses since 1961. John F. Kennedy’s ‘ask not’. I thought this was the best inaugural address I ever heard.” pic.twitter.com/LVnziRqqEY